Feeding on the dreams, emotions, and inner darkness of humanity, the Weirdwood is a primordial forest that grows just beyond perception. Its roots spread to every corner of the world, and the stuff of nightmares linger in the shadows of its ancient trees.

Sometimes, a persistent branch finds its way into the material realm, pushing through the cracks in abandoned buildings or blooming in dark alleyways.

Sometimes, something else comes through...

WEIRDWOOD is a narrative roleplaying game of dreams, nightmares, and the darkness in between. The characters belong to the Vartijat, an ancient order dedicated to protecting an unsuspecting world from a mysterious realm born from countless lifetimes of imagination. Whether hunting down fell creatures or thwarting the ambitions of those who seek to bend the Weirdwood's power to their own selfish ends, the Vartijat are humanity's first and last line of defense against the eternal darkness.

The Weirdwood is rarely the same in every location. For each game, the players create a unique version of the Weirdwood as it exists in their chosen city by answering a series of prompts from the Gamemaster to define its physical characteristics, important locations, native inhabitants, and magical qualities.

WEIRDWOOD uses a simple, collaborative dice-pool system for task resolution that encourages players to introduce complications and interesting narrative elements. Suitable for three to five people, the game is ideal for players who prioritize storytelling, theme, and drama over strictly defined rules.

The 32 page fully-illustrated black & white rulebook contains everything you need to play. You can use any size or style dice.

Physical copies of the game can be purchased directly from the Last Redoubt Games website:

GET WEIRDWOOD IN PAPERBACK

To receive updates about WEIRDWOOD and other projects from Last Redoubt Games, be sure to join the LRG Mailing List. You'll get access to free text-only copies of the games REVENANT and HOUNDS OF THE TSAR just for joining! 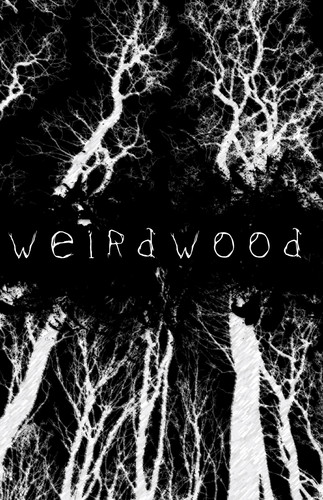 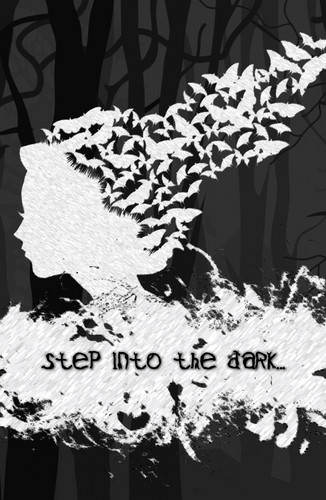 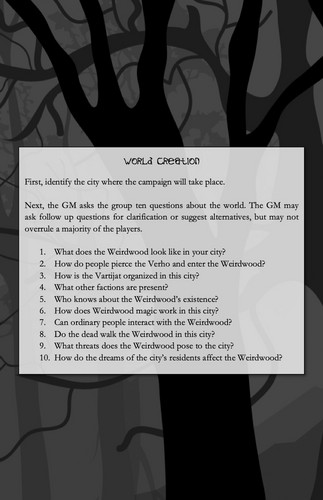 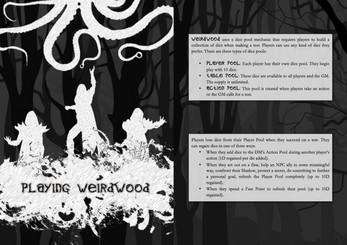